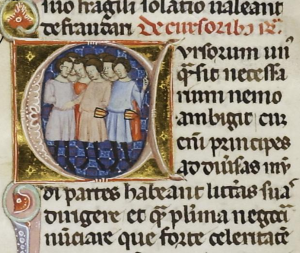 Starting in the fourteenth century, royal, episcopal, and city administrations around the Crown of Aragon began formalizing their methods of communication.  By late in the century, the kingdom was woven together by a dense web of ambassadors and runners who could move information between cities and courts at surprising speed.  The level of formalized communication allowed for new practices of information dissemination, collaboration, and secrecy at multiple levels of government.  The siting of hostile ships along the coast could prompt the use of relay runners, each informing the next city along the coast of the potential threat.  Military or commercial negotiations might prompt multiple messages with sensitive information to be disseminated only to certain people with differing information to be cried publicly.  This project is still in its initial stages, focusing largely on the robust system of couriers put in place in the 1360’s in the city of Valencia.  However, as the project progresses, the long term goal is to look at the extensive use of such runners.  What other cities kept fully employed runners?  How did the city systems interact with royal and episcopal messengers and representatives?  How large did an administration have to be to employ such men?  What other news did they carry?  How effectively could administrations control the flow of administrations both to the public as well as to competing power brokers?

This project is directed by Adam Franklin-Lyons

Adam has also recorded a podcast describing the origins of the research.

At the 2016 Vermont Medieval Summit, Adam presented an essay on Valencian communication.  There is a summary and collection of maps available.