This project works with the Byzantine Chronicle of Theophanes “the Confessor,” the early ninth-century completion of the Chronography of George the Synkellos.

For a summary of the project, keep reading: 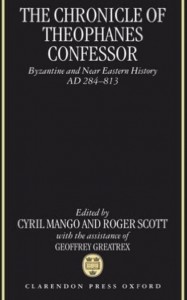 Theophanes’ completion of the Chronography of Synkellos gave a year-by-year account of the world as seen from Constantinople, from the reign of the Roman Emperor Diocletian (AD 284) to the accession of the Roman (“Byzantine”) Emperor Leo V (AD 813). Particularly because its account of the seventh and eighth centuries is one of very few that survive, Theophanes’ text is one of the single most important sources for Byzantine history, and for the history of the Eastern Mediterranean world in general. Nevertheless, in practice historians tend to read the text in piecemeal form, dropping in to extract the Chronicle‘s account of a particular year, or event.

Our project seeks to utilize “digital” analytical tools to evaluate the hypothesis that the Chronicle — despite the fact that its text is largely made up of excerpts from writers prior to Theophanes and George Synkellos — would have constructed a narrative plot in the minds of its readers.

We are now well into the first stage of our research to test this hypothesis.

Taking our cue from the earliest surviving manuscript of the Chronicle (Paris Grec 1710 at the Bibliothèque Nationale de France, copied ca. AD 850), which divided the Chronicle‘s text by emperor’s reign, our project seeks to identify and then compare the geographic signals that would characterize each emperor’s reign in the minds of its readers. To do this we are currently identifying, and mapping, the geography evoked by the language of the text.