Constantinople as Palimpsest is an interactive, space-based encyclopedia of Byzantine Constantinople. It was created by Prof. Jesse Torgerson and his Wesleyan undergraduate students as part of their regular coursework, integrated with the Traveler’s Lab, and supported by its student researchers. It is our first sustained Traveler’s Lab project that fully blends the ongoing work of students in the lab with a stand alone, one-semester course.

To create this project, we took advantage of a project-based pedagogy (on which, see below) and had students “unearth” (through good old library research) what they could discover of current knowledge of the material realities of the capital of the medieval Roman Empire, Constantinople (modern Istanbul). Students uploaded their research projects onto Esri’s ArcGIS online platform, then curated and organized the cumulative collaborative database via StoryMaps.

Click the image below to explore the interactive digital encyclopedia . Since the site remains in its “beta” version, scroll down for an explanation of how to “read” the content in the database, and to learn about the process of its creation. 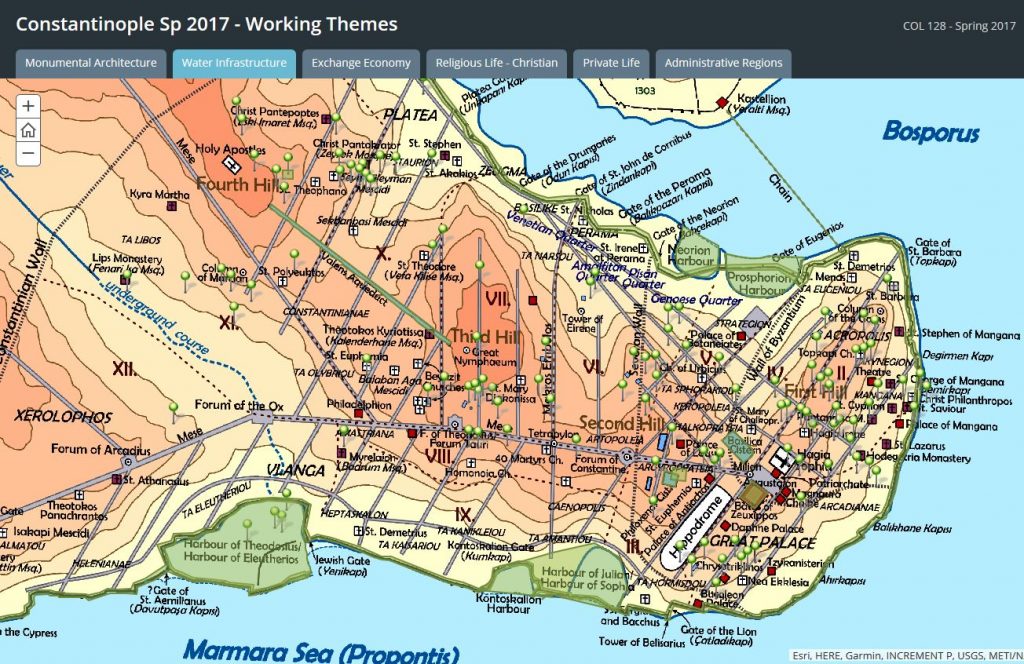 On this map, as above, we currently we have curated over 300 distinct items into six overlapping “themes” — Monumental Architecture, Water Infrastructure, Exchange Economy, Religious Life, Private Life, and Administrative Regions.

These themes present scholars’ current knowledge of the topography of medieval Constantinople. Each pin, line, or polygon in the database (everything that is green) can be clicked to activate a “popup” dialogue box. Each dialogue box contains a brief encyclopedia entry on that item (whether it is an item, a monument, a site, a region, or a route), which gives a short definition of the item, its date, some commentary, and then further bibliography and image citations. The content in these boxes represents a student’s self-designed research project, which that student (cited as the entry’s author) generated as their coursework for a single week of the semester. These are the surviving traces of Constantinople, as “unearthed” by students.

Constantinople as Palimpsest: an experiment in Project-Based Learning

Constantinople as Palimpsest represents our first attempt to fully link the Traveler’s Lab researchers and the digital humanities acumen of the Traveler’s Lab students with a traditional course (where students are ultimately responsible for acquiring mastery of specific content, as determined by the Professor). The Project-Based Learning model — sustained at Wesleyan by a Davis Foundation grant won by Prof. Lisa Dierker, and supported by Paula Blue and Dan Mercier at Wesleyan’s Center for Pedagogical Innovation — provided the conceptual framework for this pedagogical approach.

The Constantinople as Palimpsest project has thus far undergone two course-based incarnations. It was initiated by the twenty students in Jesse W. Torgerson’s Spring 2015 course, Re-imagining East and West: Constantinople between Rome and Istanbul.
Then in Spring 2017, a second group of fifteen students — supported by two student researchers in the Traveler’s Lab (Connor Cobb (Wes ’16) and Nadja Shannon-Dabek (Wes ’17)) — took up the project as their coursework for Constantinople: From Rome to Istanbul (COL 128).
A third version of the course, scheduled for Spring 2019, will further develop the project.

From the Acquisition of Historical Knowledge, to the Making of History

The screenshot below gives a sense of what the initial 2015 version of the project looked like. In part this image simply shows how far we were able to develop the aesthetics of the project (partly by making our basemap a geo-referenced version of Konstantinos (Kostas) Plakidas’ publication to Wikimedia commons of his synthesis of R. Janin’s Constantinople Byzantine). 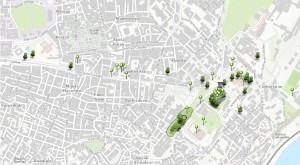 But, more significantly, this image shows in nuce why our different approach to history is so significant. Project-based thinking is not just a different way of running course assignments, but a different way of doing history. Participants in the course collaborated on our GIS-based database to “plot” scholars’ current knowledge of the topography of medieval Constantinople. Thus, students did not experience “history” as a passive appreciation of past things, but came to understand and gain real ownership over the remnants of this lost world through active research. They learned the topography of our historical knowledge of Constantinople by actually generating that topography.

How does this sort of work actually change students’ relationship to history? In the above screenshot, each point represents a specific known material object, preserved today as either a textual or physical artefact. The dispersal of these known items is not democratic. It is not “of the people.” Instead, it is concentrated along the imperial processional route, the mese. Students quickly came to see — in a much more profound way than simply hearing their professor repeat the point from the lectern — how and why our understanding of the Byzantine period is so dominated by imperial narratives and monuments. The markers on this map cluster at (from left to right) the Forum of Theodosius I (r. 379-392), the Forum of Constantine (r. 312-337), the Hippodrome, the Baths of Zeuxippus, and the cathedral church of Hagia Sophia. The persistence of this dominance of the imperial narrative over the surviving source material was only more deeply re-iterated with the additional material added in Spring 2017, as can be seen by perusing our “Monumental Architecture” theme. To uncover a “people’s history” requires intentional and difficult work.

The database both reveals this bias, and makes it possible to work against it. Students pursued this work with enthusiasm. Our 2017 themes “Private Life,” “Water Infrastructure,” and “Exchange Economy” are all attempts to bring non-imperial experiences to life. Students also fought against this bias by creating their own historical narratives and artistic responses to Constantinople, based on the imagined geography of our database.

A number of these analytical projects were created as Story Maps. For instance, one such Story Map (by Elena Milin, Wes ’18) explored what it might have been like to be swept up in the way a famous, prolonged urban revolt against the Emperor Justinian I (d. 565) — the Nika Riots — as the crowds, imperial troops, and raging fires would have moved through the monumental environment. Thus, besides simply using the opportunity to generate new voices and perspectives, many of these student spin-off projects built out from the new theoretical perspectives opened up by the project’s emphasis on creating a sense of space and place in history.

(2) facilitate Wesleyan students’ collaborations with professors and students at other institutions in pursuit of space-based analyses of medieval Constantinople, both as it might have been, and as it has come down to us in the present